Letter from the President

Another fine and successful conference is behind us. It was great to have a joint meeting with ILBA hosting people from around the world that share the same interest. It’s always a lot of fun to see everyone and share friendships.

If you were not able to make it to this conference, you missed out on the funniest, most hilarious thing ever seen by mankind. It happened at the grand dinner that evening. But started hours before when the 8 Time World Champion Chainsaw Carver, Mannu KyllÖnen, did an exhibition of his work prior to tool tech. He chainsawed a Norwegian dog similar to a husky in about 30 minutes. It was expertly done and a fine piece of artwork. All that attended were amazed at the speed, craftsmanship and detail accomplished.

It was later announced this carving was up for auction at our dinner. As things go, all showed interest as the bidding continued very generously, I might add, as it came to a close. The generous bidder was none other than Gary Pavlicek. I suggested that Gary and Mannu have their picture taken for the newsletter. Gary is shy but with the help of his wife, Karen, Gary came up. A few photos were taken and then jest and fellowship with a non-English speaking chainsaw carver happened. They hugged, shook hands, laughed and joked as the camera clicked. The carver then kissed the mouth of the carved husky and, yes, Gary did too. In front of all present, he kissed the other end of the dog. The whole group laughed hysterically. The waiters, bartender, Karen, his wife, Gary’s family, Gary’s friends, and all of us. That one moment was worth the trip. Gary was a very good sport. I think those photos were sent to USA Today and perhaps somewhere on the internet. 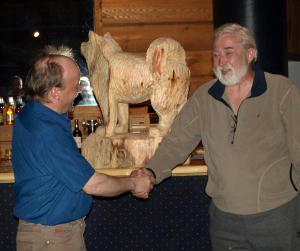 The above photo was provided by Kevin Maynard. Gary is thanking Mannu KyllÖnen for the beautiful work he did on the carving

I also enjoyed some rare vodka from a crystal skull purchased by Chris Clay at the auction. Chris was harassed by many to open it and share, which he finally considered to do if he was to leave unharmed.

Now, it is a fact that the GLLCA conference gets better and better every year. Successful people belong to successful organizations.
Join or renew and learn.
Grizzly Bob

Join GLLCA for more support and tips from a network of experienced log builders!

The Great Lakes Log Crafters Association is chartered as a non-profit organization in the State of Wisconsin, USA. The Board President, Board Members, and Officers are elected by the general membership and serve as stewards for running the association
View all posts by gllca →
This entry was posted in Conferences, Robert Kenel and tagged conference. Bookmark the permalink.